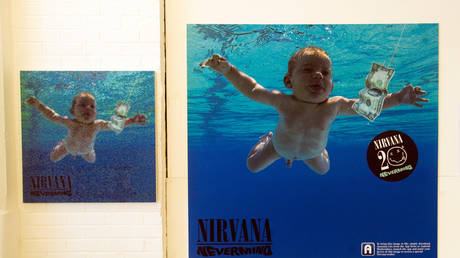 Spencer Elden, now 30, has met a deadline to relaunch his complaint against Nirvana, claiming the image they used of him as a baby is in fact “child pornography.”

In court filings submitted on Wednesday, Elden restates his position that the rock band “intentionally” marketed an image that constitutes “child pornography” to promote their 1991 album.

While the complainant alleges the band earned “tens of millions of dollars” from ‘Nevermind’, he claims to have suffered “permanent emotional distress” after being pictured nude in a swimming pool.

Further chastising the band, Elden’s legal representatives argued “the image of Spencer with his naked genitals displayed while grabbing at money resembles the actions of a sex worker.”

Nirvana has rejected all of the claims made by Elden, calling his lawsuit “not serious” and arguing that, until recently, he appeared to enjoy being known as the “Nirvana baby.”

“Elden’s claim that the photograph on the ‘Nevermind’ album cover is ‘child pornography’ is, on its face, not serious,” the band’s lawyers said, stating that, if Elden’s claims were proven true, it would make anyone who owns the record “guilty of felony possession of child pornography.”

The judge rejected the lawsuit at the start of January after Elden’s lawyers failed to respond to Nirvana’s request for dismissal by a December 30 deadline. Judge Fernando M. Olguin didn’t rule on the merits of either side’s position, leaving the door open for Elden to refile his case, which he has now done.

Elden is seeking at least $150,000 from each of the defendants, including the surviving band members, Kurt Cobain’s estate, Cobain’s former wife, record labels Geffen and Universal Music, and the photographer Kirk Weddle.

Begin typing your search above and press return to search. Press Esc to cancel.